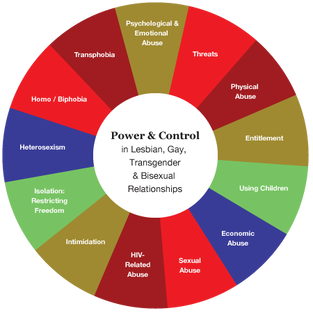 Gender Expression- Aspects of behavior and appearance that affect, or are intended to affect, how others perceive one’s gender · Gender-The different, culturally specific, social norms of behavior and appearance that are expected of males and females. · Lesbian- Women whose primary sexual orientation is toward other women · Gay-Men whose sexual orientation is toward other men · Bisexual-Someone whose primary relationships can be with men and women · Transgender-Someone whose self-identification as male, female, both or neither does not match the gender assigned to them at birth. · Heterosexism - The belief that heterosexuality is superior and normal · Homophobia- Irrational fear of or aversion to LGBT people. · Biphobia- Irrational fear of or aversion to people perceived to be bisexual. Does your partner… · Threaten to out your personal identity/information if you leave? · Take advantage of you because you were rejected/unaccepted by friends or family when you came out? · Pressure you into sexual acts to ‘prove’ you are queer enough? · Project internalized transphobia by reinforcing CISSEXISM/Gender norms in the relationship? Ex: You’re only a man if your chest is flat or only a woman if you have curves. · Intentionally refer to you by your deadname or with the wrong pronouns to trigger your dysphoria? · Threaten to trash talk you to the often small and over lapping LGBTQ community so you have no access to support? · Threaten you that you could have you child taken away when it’s already hard enough for LGBTQ+ parents to be validated/ supported?

HERE ARE SOME OTHER ORGANIZATIONS IN NORTH CAROLINA THAT PROVIDE EXCEPTIONAL EDUCATION ON THE QUEER AND TRANS EXPERIENCE: